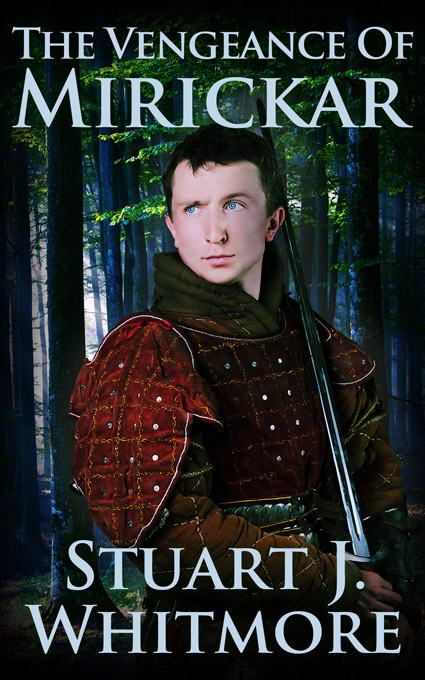 Mirickar is on the hunt.

His quarry: An age-old foe that others deny are even in the kingdom. Mirickar knows better. The kurakvin murdered his parents and he couldn't even give them a decent burial. But Mirickar grew up on a farm and doesn't know much about combat.

His mission of vengeance is complicated by not being the only survivor of the kurakvin raid. Sraikura, the adopted girl from the neighboring farm, just wants to run and hide. Mirickar reluctantly goes with her into the forest, intent on ensuring she will be safe before he continues his quest. She begs him to stay with her, insisting that a mysterious magical power in the forest will protect them both. Protection isn't what he wants. Protection won't rain vengeance on his parents' killers. Before they can agree on a plan, a tragic accident takes Sraikura away from him, leaving Mirickar to question all of his actions and decisions.

A chance meeting with an old warrior seems to open an opportunity for Mirickar to learn to fight. To be successful in his hunt. But the old warrior thinks it's folly, and he presses Mirickar with troubling questions. Can he really find any kurakvin to fight? If so, will he prevail? And to what end?

Ask for it at your local library!

If you would rather borrow the book than get your own copy, and if your local library uses OverDrive for e-books, ask your friendly librarian to add The Vengeance of Mirickar to their catalog.

Mirickar looked up in surprise. The low boom he heard from the direction of his home triggered his curiosity. He pushed back the stray strands of his long, dark hair and considered abandoning his chore. The urge to return home, to ensure that everything was in order, was offset by not wanting to face the ire of his mother. She would be disappointed if he returned with his basket only half filled, if there was no good reason for it. He was sure to hear about it if he did not return with a full basket of the greens and mushrooms that she used in cooking.

"Perhaps father dropped something large and heavy," he mused as he looked down again, seeking out the plants his mother liked most to add to their meals. Approaching his eighteenth summer, he looked forward to more challenging and exciting tasks than foraging.

He had not collected much more when he heard his name being called urgently in the distance. He knew before he looked up that it was not his parents. As his gaze shifted upward again, he was not surprised to see Sraikura, but his curiosity was mildly fueled by the apparent urgency in her approach as she ran across the open field toward him, her wild red hair streaming behind her, flapping her hands in agitation as she ran.

Sraikura was around his own age, but other than age and looks she was largely a mystery. The Kehnmark family, whose farm bordered his parents', had found her hiding in the forest as a child. Despite their efforts in the years since, she never seemed to lose the feral nature she showed when she was first found, nor did she gain much ability to speak or to comply with normal manners.

"Mirickar!" Sraikura yelled again as she drew near. "Mirickar!" The way she said his name, the last letter was almost entirely dropped.

"What is it now, Sraikura?" he answered when she reached him. After growing up with her, he knew she could become agitated at seemingly simple things. One time, she had been in tears and clung to him for a reason he had never grasped, apparently having something to do with a leaf floating away on a stream.

"Home! Home! Bad! Bad men! Home!" Sraikura cried out, grabbing one of his arms and pulling at him. "Home!"

Curiosity gave way to alarm. Her speech was worse than usual, and despite the confusion that seemed to swirl around her, Mirickar had never known her to raise a false alarm. Thoughts of greens and mushrooms were gone in an instant. He following her at a run across the field toward their homes.

When they reached the edge of the field, he pushed past her to take the lead. They ran along the narrow path that led through the small stand of trees to the edge of the tilled fields that were part of his family’s farm. He could hear her panting behind them as they ran, and at times she made a soft keening sound that made him worry even more. No amount of worries could prepare him for the scene that met his eyes when they burst out of the woods onto the field that had been planted with beets just a fortnight ago.

Mirickar stopped suddenly and stared, instinctively holding out a hand to stop Sraikura from running past him. On the far side of the field, black smoke was billowing out of his family’s cottage, and flames were licking up the building through the windows. Dark shapes were moving between the cottage and the barn, but they seemed too small to be men. He glanced back at Sraikura. The panic he felt was written clearly on her face.

“Stay!” he hissed, abruptly dropping his basket and holding up his hands to emphasize the command. “Stay here!”

Without waiting to see if she would obey him, Mirickar turned and began to run across the field. He had only his fists for weapons, but he felt he had no choice but to try to help his family. The soft-tilled ground seemed intent on clinging to his feet but he pressed on, keeping his eyes on the scene ahead and the threats that awaited him.

He slowed slightly as he realized that the attackers were not human. He wondered, could these be kurakvin? None had been seen in the kingdom since before he was born. He had little time to ponder the question. One of the short figures noticed his approach and set out toward him, raising its short sword and giving a war yell as it did.

Continue reading today! Grab your copy of The Vengeance of Mirickar from your bookstore of choice today to keep reading!