A Psychological Thriller in a Science Fiction Setting 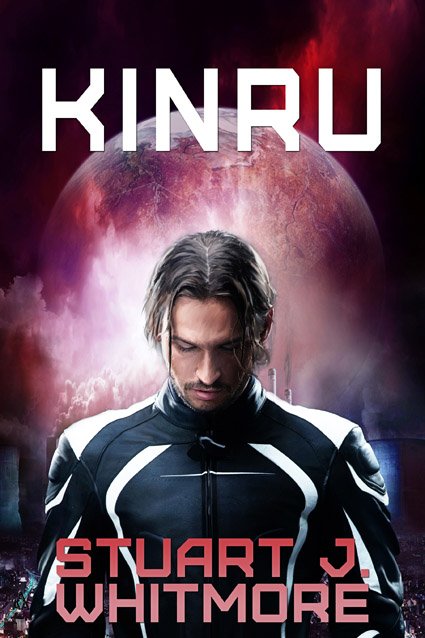 A man like Birkran Kinru should feel comfortable in a highly-automated world. Birkran likes to be left alone. People make him nervous. With menial labor handled by robots and digital communications making in-person interaction unnecessary, Birkran should be able to enjoy technology-enabled seclusion. This might be possible, if only he had a permanent home of his own. Instead he must scuttle through the underbelly of the city, from one hiding place to another, knowing the government can watch every move.

Birkran wants nothing to do with government and politics. He especially wants nothing to do with Corlane Deryala, an ambitious young politician who seems burdened with health problems. Nor does Birkran want any connection to a mysterious hacker with strident anti-government views. Birkran would stay far from these other men, but he seems trapped in a strange connection to both of them. His off-the-record doctor seems motivated to help, but Birkran is left with more questions than answers. Despite his paranoia, people seem to leave him alone... until he realizes that somebody is toying with him for their own benefit. What he learns about the politician and the anarchist opens a surprising new door for Birkran.

For fans of The Strange Case of Dr. Jekyll and Mr. Hyde, Do Androids Dream of Electric Sheep? (the basis for Blade Runner, of course), 2001: A Space Odyssey, and other thought-provoking tales!

Corlane Deryala looked past his Rann colleagues and out through the conference room window to gaze at the traffic streaming by. The mesmerizing stream of hover transports, all evenly spaced and synchronized, was a suitable distraction from the police commissioner's maundering excuses. The old man should have retired years ago, Corlane thought. The city might finally make some progress catching the troublesome anarchist if that retirement happened now. Or if a convenient accident occurred, Corlane thought darkly.

"So what you're saying," Corlane spoke up into the awkward silence when Commissioner Wurly stopped speaking, "is that despite all of the staff and technology you could hope for, with surveillance essentially embedded into every corner of this metropolis, you still have no idea who this man is, what he wants, or when or where he might strike again. Or, to put it succinctly, despite having every resource to not be in the dark, you are in the dark. And so are we."

"Rann Deryala," Commissioner Wurly said, his voice taking on a whining note that reminded Corlane of his nickname for the man, Commissioner Whiny, "as I told Rann Yussar, we have collected information but I did not deem it necessary to bring it with me today."

"Because," Corlane said, "it is of no value, as your whitewashed overview of the problem amply demonstrates. I can collect useless information too--"

"Rann Deryala," another man, seated at the head of the table, spoke up, "as the junior member here, it might be best if you listen and learn rather than interjecting your frustration. We all want to catch this anarchist and end the mayhem he is causing, but bickering with our talented law enforcement forces will not move us closer to that goal."

Corlane wanted to ask Rann Yussar when they might get to meet the talented police forces, but he knew it would be unwise to be outwardly insubordinate to Rann Yussar. The police commissioner would not pose any future threat to his political aims, but Alluk Yussar was another matter entirely. "Yes, Rann Yussar," Corlane acknowledged. It was time to tune out the rest of the meeting. Listening was pointless, there was nothing useful to learn from people making excuses or patting themselves on the back for non-accomplishments.

Corlane returned from the conference room via a water refill station to top off his puraflask, and he took a long drink when he arrived at his cubicle. It was the best tasting water one could ever hope for, but water is water, not exciting. Corlane waved his hand over the activation circle on his desk. A soft tone let him know he could proceed.

"Remind me when I am at home to put a package of Nu-tasty in my pack," he said. A two-tone, low-high response let him know that the task was completed. "That is all." Another soft tone sounded.

"Rann Deryala," he heard a female voice behind him.

Corlane turned. "Rann Pillane," he said with a nod of greeting. Sertea Pillane was a tall brunette who never had problems attracting men, unless the problem was attracting them too easily, but for some reason Corlane never felt that sort of attraction himself. He was pretty sure she also held no such interest in him. This did not limit their friendship, however; if anything, it enabled it. "Any good word for me this afternoon to help ease my impatience with bureaucrats?"

Sertea laughed lightly. "Such disdain for your future position in life."

"Did you hear that Rann Huisar was re-elected?"

Corlane's eyes grew wide for a moment. "Are you kidding? I thought for sure that she would lose this time. One scandal after another, yet she keeps her position."

Sertea nodded. "I think one leads to the other. She stays in power and retains access to all the temptations that lead her into scandal, and her scandals entertain the masses, even if the masses would be quick to deny it. Maybe," she said with a wink, "you and I should have a scandal or two when it's time for our re-election."

"Oh, sure," Corlane said. "All in the name of duty to my constituents, of course."

"Of course. Say, you were supposed to have an appointment with your medoc yesterday. How did that go?"

Corlane shrugged. "As ambiguous as every other visit. Healing apparently is one part billing and one part keeping patients in the dark so they don't realize how badly they're being over-billed."

Sertea arched an eyebrow. "Don't start ranting about medocs," she scolded him lightly. "My father is one and I dare say he never overbills his patients."

Corlane gave a little laugh. "And I dare say you never missed out on any holidays as a child."

He waved his hand dismissively. "You know I'm teasing. Okay, mostly. I would love to get to the bottom of my troubles, though, rather than the bottom of my bank account. I feel like the latter will happen before the former."

"Do you want to talk to my father?" Sertea asked seriously. "He's not a sleep disorder specialist, but he might be able to give you a second opinion, or at least validate what your medoc is telling you. Or, I suppose, if there's something wrong with what yours is doing or saying, I'm sure he'd be honest enough to say so. I could introduce you, and get you a family discount. If he doesn’t feel qualified, he can at least give you a referral to someone he personally knows and trusts."

Corlane was quiet for a moment as he considered it. "I may take you up on that," he finally replied. "I don't want this thing holding me back and somehow I could see a future challenger pointing out my health problems as a reason people shouldn't support me."

Sertea was about to say something more, but a distinctive pattern of chimes from behind Corlane caught both of their attention. One low, three high, three times in a row. That didn't directly mean bad news, but they never announced good news urgently. Corlane turned and waved his hand over the activator.

"Main display, incomm one," he said. A section of wall that previously blended in with the surrounding wall turned black and then became an image of the city government's logo and a message telling them to wait.

"How much do you want to bet he's struck again?" Sertea commented softly, her eyes on the screen.

"Bet? With our politically-protected police taking their sweet time investigating? I'd consider it a sure thing. The only thing worth betting on is how much damage he did and how disruptive it was."

"Or what the point of it all might be," she commented.

"Point?" he asked, glancing back at her briefly. "He's an anarchist, he doesn't need a point, he just wants to cause trouble, disrupt things, impose chaos over order, that sort of nonsense."

Sertea made a soft humming sound. "Maybe," she said.

Before Sertea could elaborate, the display changed....

Grab your copy of KINRU from your e-book store of choice to keep reading!